When orange leaves have fallen from the trees and autumn darkness creeps ever earlier in the day, it is easy to get in the right mood for creepy stories. And now, around Halloween, you might be a little extra attracted to search for and indulge in things that create some excitement in everyday life.

As the phone takes up more and more space in our lives, it may be inevitable that horrible things happen around them. And believe me, if you start looking a little deeper on the internet, it’s scattered with a bunch of scary stories to read. For this year’s Halloween special, we have chosen to focus on frightening calls.

Below are 5 short stories about conversations that can send shivers down the spine.

John was on his way to town to meet up with a good friend, they would watch a game of hockey and eat a burger. On the way, John’s friend called and told him that there was a traffic stop due to an accident and that he would probably be late. At that moment, John saw the red lights from the cars standing still and said he was in the same traffic jam. They joked about that it was fortunate that they took the same road as they would both be as late, then they hung up. The traffic was moving slowly and John arrived at the scene of the accident. Horrified, he saw that it was his friend’s car that was demolished on the roadside.

Amanda was ecstatic the day it was announced that a well-known medium would be visiting her favorite radio show. Her grandfather had died a few months earlier and Amanda wanted to have a chance to talk to him. The day came and Amanda feverishly tried to reach the radio station, but unsuccessful. Devastated, Amanda sat on the couch when the program was over. Then the phone rang, Amanda answered. A distant voice began to tell her that he was feeling well, that he was her grandfather and that Amanda should focus on the future.

At first, Amanda was only shocked to hear her grandfather’s voice but after a while she became suspicious. Was it a prank call? She picked up the phone to check what number the call came from. Astonished, she saw that it was her own mobile number that had called.

Constantine was a writer and scientist from Latvia who had a sincere interest in the after-life. Raudive worked on what is called EVP (electronic voice phenomena). He recorded over 100,000 audio files, but the work did not produce any direct results

Raudive died in 1974 and his then partner Meek continued to work alone, but without success. However, 20 years after Raudive’s death, Meek began to receive strange phonecalls. The man who called claimed to be Konstantin Raudive and talked about the collaboration they had been working on and that their conversation would be a mere next step in their research.

Meek managed to record some of these conversations but could never determine exactly where the conversations were conducted. Many who research paranormal phenomena have listened to the recordings and opinions differ. Some claim that this is an elaborate scheme on Meek’s part, while others believe that this is strong evidence of life after death.

For those who like to dig a little deeper, the recordings are available on the internet.

Meshir opened a restaurant in Algiers and immediately started getting prank calls in the evenings. The conversations came from a little girl and she always talked about normal everyday things like toys she liked or what had happened during the day. The calls came almost every day and Meshir and his staff did not put much thought into it at first.

Now you may think this sounds like ordinary prank calls. The scary thing in the story is that the conversations kept coming for fifteen years and the girl’s voice never changed. The same little girl called, year in and year out. Until Meshir retired and the restaurant was closed, the girl kept on calling. As the restaurant was closed down, the telephone number was also closed and thus the calls ended. But who knows, maybe someone phone number got a new owner that the girl could continue to call.

When David arrived at work for the night shift, his boss asked him what he was doing there. David, of course, wondered what the boss meant and then was told that David had called in sick earlier. When David tried to reassure the manager that the call must have come from someone else, the manager showed the number that had been dialed, which really did belong to David.

A little confused, David called his wife who was home to check that she wasn’t the one who called. But instead of hearing his wife’s voice, David heard a voice that was frighteningly similar to his own. He asked where his wife was and got the answer that she was sleeping. Scared David told his boss that he had to go home. Once at home, he saw that his wife was sitting on the couch watching TV and had not even heard it calling.

But the creepiness doesn’t end here. Even more confused, David chose to go back to work again. He was met by his boss who asked “How did you do that?”. The manager then told him that David had called the manager, just minutes after leaving the job, from his home phone and asked what was going on.

These were some scary calls that people have said that they experienced. And who knows, you might be getting a weird call yourself, a late Halloween night…. 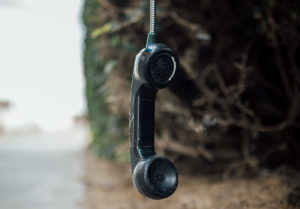 Halloween special - Scary and inexplicable things that happened at work

The technology we have to communicate with each other has obviously brought very good things. But when it comes to things that are so important in our everyday lives, it is perhaps...

Phone fear are most often associated with people who find it scary to make calls or answer when someone unknown calls. But around Halloween, it can be exciting to look at cases whe...